I promised you all an update about my NaNoWriMo progress and I’m pleased to announce that I surprised even myself by winning! Not only did I manage to win, I won on the 26th with 5 days to spare so I’m pretty impressed with myself considering that it was my first NaNoWriMo. I wrote a legitimate novel, 50,146 words long and although it needs a lot of tidying up it has a beginning and end and everything. 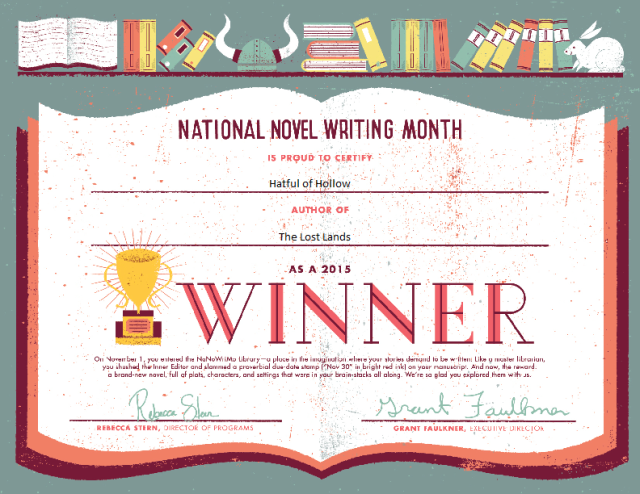 Of course because I was trying to write 50,000 words in just 30 days and I neglected to plan before I started the content isn’t the most literary to put it kindly. The plot weaves back and forth like a drunken snake and the names of my characters are often dodgy because I didn’t have time to research. So I had a character called Marcus Julius; not very original huh? It won’t ever be available at a library near you but it is something I produced myself in just 26 days so I’m happy with it.

The novel is the first person narrative by a Briton in the early fifth century who is caught up in the events surrounding the end of Roman Britain and the resulting upheaval. He meets Artorius (who you may have heard of as Arthur) and becomes a warrior in the struggle against the Saxons and Jutes who are settling in southern Britain. If it sounds awfully generic then that is because it is but I tried to go down routes other writers hadn’t explored and to make it relevant to current events.

The good news is that I found the writing process very inspiring and NaNoWriMo has reawakened my long dormant desire to be a writer. I plan to take the time to write something better, something that has a story line and a proper plot now that NaNo is over. This time next year maybe I’ll have two crap novels to my name, but I enjoy writing and that is all that matters to me.

An excerpt of my novel is below just in case anyone is suffering from insomnia and needs help sleeping. Thank you for all the support you gave me when I announced I was going to try NaNo, my fellow bloggers are awesome!

Artorius would often talk to me about the Saxons as we walked. He had questions about obvious things like the way they fought but he was also interested in things many other people wouldn’t have even thought to ask. He would ask how their houses were constructed, how they communicated with their gods and what they grew on their land. The truth was, of course that they lived in a similar way to many of our people. They farmed the land, preyed to their gods and hoped for a good harvest.

These conversations with Artorius shaped my perception of him a lot. He was an earnest, religious character which could be irritating at times but he was a highly intelligent man with an eye for the big picture. He didn’t just think about holding back the Saxons, he was thinking of how we would live alongside them decades from now if we couldn’t kick them out. Rather than worry if we had a big enough harvest, he would be planning how to make next year’s harvest bigger.

“There are still those who think that despite what Honorious said, the Roman’s will come back to Britain” he said one day, looking at me with that intense gaze. “That is not going to happen; from what I hear from Gaul the Romans are hard pressed there and won’t stay there either. They are hard pressed everywhere in the west in fact and it could be that the Roman period is coming to an end. This would seem to be the age of the barbarians, and we need to fit into it as well as we can” he added.

I was stunned at his words. I had not expected the legions to return to Britain but I was unaware of the dire straits the empire was in across the whole of the west. I resolved to write to my father as soon as we got back and make sure that he and my brother were safe on his estate in Gaul. It was sobering to realise that the world that all of us had been so used to was changing so much but there was also opportunity in adversity. A man who was able to grasp the bull by the horns and seize power in these times could become very powerful indeed.

Thinking about that made the expedition to meet Dumnonia’s neighbours make a lot more sense. Artorius wasn’t just thinking about being the ruler of the Dumnonian’s, he was thinking about being the ruler of the Britons because that was the best way to fight against the Saxons, Jutes and all the others who threatened our lands.. One kingdom combined would be powerful enough to drive the Saxons into the sea, if we fought each other our enemies would win. His was a powerful ambition and I vowed to myself that I would help him with it any way I could.